Alheli Pimienta, proudly Mexican woman who triumphs outside her country. Creator of the Flute Sprint method and one of the most prolific flute players in Mexico. 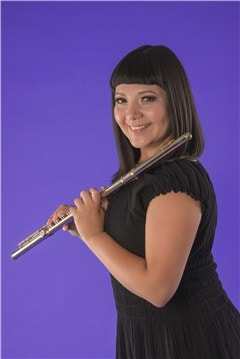 Alheli Pimienta has been a touring performing artist since the age of eleven. In addition to having mastered all the instruments in the flute family from the piccolo to the contrabass flute, she also plays a variety of folk flutes. Her life-long international performing career has fostered a deep understanding of how live classical music affects listening audiences around the world. This inspired Alheli to curate hundreds of different performances and festivals in North America. Some of these events include large conventions such as The Toronto Latin American Flute Festival and The International Flute and Piccolo Convention of Monterrey, the Canadian Flute Convention, dozens of international chamber music tours, and independent productions with some of the world's most prestigious classical, folk and jazz musicians.

Alhelí is a passionate flute teacher and faculty at the Kingsway Conservatory of Music in Canada. She has created the renowned scientific method Flute Sprint, where she trains aspiring professional flutists through sensory stimulation and sensorimotor therapy. An accomplished music academic, experienced performer, organizer and curator, Alheli intrinsically understands how to reach and impact the heart of audiences around the world.

Alhelí studied flute performance in Mexico, France, Brazil, USA, Canada, and has a Master's degree from the University of Idaho, an Artist Diploma from the Glenn Gould School of Music, and completed four years of Doctoral Studies at the University of Toronto. She is a proud Yamaha Artist and performs around the world on an 18K handmade gold flute.